There’s so many Paul Pogba claims around today that we could probably write ten articles about the Manchester United midfielder.

However, they would bore you to death and send us closer to insanity, so we’ve packaged the best/worst together for what will now be known as The Daily Paul Pogba.

First up, we’ll take Le10 Sport. They have what they present as an exclusive over Mino Raiola’s ‘XXL’ demands.

The agent is said to be in ‘full negotiations’ with Real Madrid and has told them he wants:

Then it’s over to El Confidencial, usually well informed on Real Madrid transfers. They say Pogba is ‘is using Madrid to press for a better renewal with Manchester United and have a salary increase that will take him to €16m net per year.’

They’re putting a negative slant on things, and explain that Madrid’s core plan is to sign Eden Hazard (for as little as €80m – don’t tell Chelsea fans), Luka Jovic and Adrien Rabiot.

Others, such as Pogba, Sadio Mane, N’Golo Kante and Christian Eriksen are considered ‘luxury’ signings which would be very difficult to complete.

It’s further pointed out that Manchester United don’t want to sell, and the player’s wages would be ‘exorbitant’.

Negativity starting isn’t unusual in this kind of transfer drama. First it’s all big claims and sun shining, and then cold hard reality starts to slap the rumour around the face.

Marca, who sound as bored with the saga as you are, say ‘Solskjaer resists’, and explain Madrid are watching events.

AS have an article today, that also seems to have been picked up by others, which states: ‘Le Parisien’: Pogba wants to leave’ – ‘According to Le Parisien, his connection with Ole Gunnar Solskjaer would be degrading and before an uninspiring project, the separation is on the way.’

We haven’t got a clue where they’ve got this from, but we’re pretty sure it’s not from Le Parisien, who haven’t mentioned the word ‘Pogba’ once in their newspaper this week. Online there’s just a video about how he could be a dream signing if PSG were living in a dreamworld, which they’re not.

L’Equipe poke Ole Gunnar Solskjaer with a stick, saying: ‘The period of grace is over: Barça arrive. And Pogba and a few others want to leave.’ 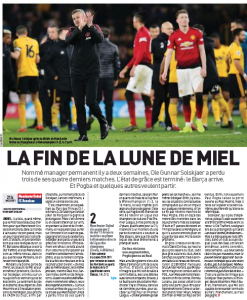 They point out that Solskjaer got the permanent Manchester United job largely due to victory over PSG. It’s stated his luck ‘eventually died out’: ‘Solskjaer has lost a little of the grace of innocence. Officially a coach, he is burdened with a suit and power that significantly changes the atmosphere, and makes him accountable for both results and future reconstruction.

‘Finally, not only does Paul Pogba leave the door open for Real Madrid, but he remains on the landing and holds it himself, to be sure that it does not close.’

Dear French media, get over it. PSG are out. No amount of making Manchester United’s manager sound like a work experience kid, or endless columns explaining why Pogba MUST LEAVE RIGHT NOW is going to get them back in this season’s Champions League.

Join us tomorrow, when the Spanish media may be screaming ‘HOW MUCH? YOU’RE JOKING – POGBA FAILS BARCA TEST’ or ‘POGBOOM – MADRID CONVINCED BY HEROICS AGAINST BARCA’. In Spanish, of course.