Alexander Sorloth’s move from FC Midtjylland to Crystal Palace has so far gone as many expected it would do.

Roy Hodgson had been recommended the player by contacts in Scandinavia and the Danish club were taken aback last winter by how much Palace were prepared to pay.

There was genuine shock in the country’s media at a fee thought to be around €9m, with it initially being expected that much less would do the trick.

Sorloth had only arrived the previous summer after a mixed period with Dutch club Groningen, and FC Midtjylland were able to make a big and quick profit.

Now the striker is set to join AA Gent on loan.

The Belgian media have been reporting the move for a while and Tuesday’s edition of HLN says the Crystal Palace player is expected to arrive today. 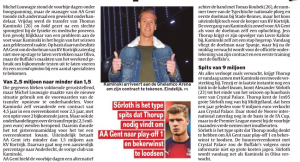 He’ll be on loan for the rest of the season and join up with manager Jess Thorup, who he worked with before the move to London.

HLN say the transfer won’t be at ‘great expense’ for Gent.

Leeds United need to pay around €15m to get deal done...