If the latest Tottenham transfer rumours are to be believed, then Daniel Levy and co. are currently looking for a defensive minded midfielder.

First came Franck Kessie, for whom Milan allegedly ‘received an offer’ from Spurs over the weekend.

Next up is Torino’s Soualiho Meite, who has impressed in Italy following his transfer from Monaco back in the summer.

The 24 year old midfielder has already attracted strong interest from bigger Italian sides, and now, according to Gazzetta dello Sport, Tottenham have joined the race, with talk of ‘love at first sight’. 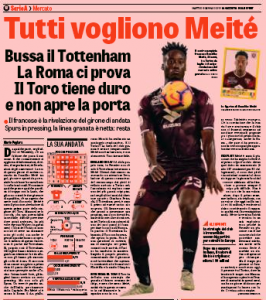 The Italian newspaper state Mauricio Pochettino’s side were ‘ready to put in a bid’, but the Turin based side’s ‘strong will’, who have no intention of letting their new star go just six months after his arrival.

In essence, as Gazzetta put it: Tottenham knocked on the door, and Torino didn’t even bother opening it.

We’ll see if money talks, but with the Serie A side in no hurry to sell and Meité seemingly non-plussed, at least for the moment, about moving, it’ll be tough to convince them otherwise.