Since Manchester United are yet to trigger the one year extension in his current deal, Antonio Valencia could technically be speaking to clubs regarding a free transfer at the end of the season.

Over the weekend, a story emerged in Italy claiming the Ecuador international had been offered to Inter, and the reports covering the Serie A side’s response have been very mixed.

One claimed Luciano Spalletti’s side were ‘evaluating’ a move for the right-back, yet Gazzetta dello Sport’s version on Tuesday is quite different.

According to the Italian newspaper, while there is confirmation of the 33-year-old being offered, their answer has basically been a ‘no’, much like it was to Arjen Robben. 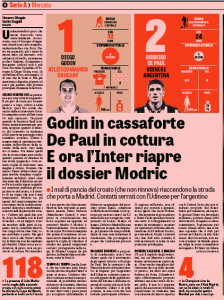 Not the news Manchester United fans, who have been turning on the former Wigan man, will be wanting to hear.