Crystal Palace, Birmingham City, and Fulham all have a good chance of signing Alexander Djiku within the next few days.

French newspaper L’Equipe report in their Thursday edition that Bastia are set to consider a quick sale of the defender. The Corsican club are in a terrible financial situation, and staring automatic relegation in the face because of their books, and selling players is the most obvious way to raise money.

Djiku, 22 years of age, is receiving interest from seven clubs. Three of those are Crystal Palace, Birmingham City, and Fulham, and the other four are Bursaspor, Olympiacos, Saint-Etienne and Caen. 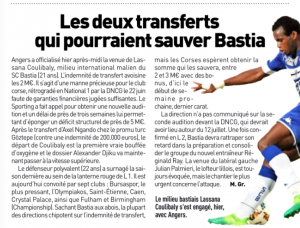 Bastia hope to raise €2-3m by selling Djiku by early next week, which gives all the clubs mentioned a good chance of doing a deal should they really push forward.

Crystal Palace would be able to offer Djiku the bright lights of the Premier League, but Birmingham and Fulham would be a better bet for game time.