In today’s Pau Lopez to Tottenham Hotspur update, Marca report the goalkeeper is set to stay with Espanyol for the final year of his contract.

Pau will fight with 35 year old Diego Lopez to start for Espanyol, with the older goalkeeper more likely to get the nod after a good season for the club. Roberto, the reason Pau was so keen to move to Tottenham last year, has now left for Malaga, and Diego Lopez had been brought in to compete with him.

The veteran soon made the spot his own, and that doesn’t look like changing, especially given Pau’s contract situation. As for trying to rebuild a deal with Tottenham, talks with the Premier League club ‘have not been fruitful’ say Marca, and Espanyol haven’t received 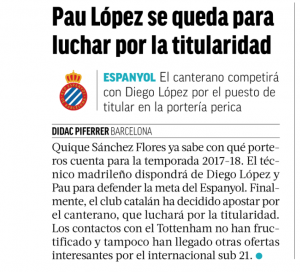 other offers for the player.

A lack of other offers is probably because clubs assume Pau will end up at Tottenham sooner or later, and don’t want to get involved.

With daily reports of talks being started and breaking down, it would be no surprise if this carries on until the end of the transfer window.