Spanish newspaper AS on Friday go over Vicente Guaita’s private release clause again. With Crystal Palace keen on signing the goalkeeper, there’s disagreement at Getafe about the price he can go for.

Crystal Palace have offered €4m, which is the figure of the private clause, but Getafe want the full €8m. Guaita is being attracted by an offer of €3m per year at Crystal Palace, which works out to be around €60k a week.

AS say ‘the contract was formalised in writing’ a week after Guaita’s actual contract, and his actual buyout clause was agreed.

It’s an incredibly strange situation. With buyout clauses required in Spain, then Guaita and his agent could simply have demanded a €4m one.

The only way it makes sense to do it the way they have is if Getafe were assured the separate agreement would remain secret. Therefore, no clubs would be told of the lower price to sign the goalkeeper, and any offer coming in at that level would just be a coincidence. 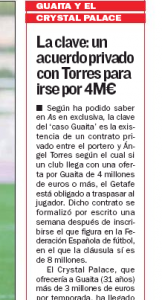 It wouldn’t appear that’s happened, unless Crystal Palace have magically triggered the figure by accident, and if that scenario is similar to what was agreed then Getafe probably feel they have a good case.

This could be why there’s been clear Getafe anger over the past week, with the player’s poor attitude criticised in the Spanish media, and the club now demanding the full clause.

AS say ‘The process can end in the courts of justice’ and relationships have clearly broken down.

Tottenham have lost out – Hertha Berlin agree fee for Piatek, medical on the way

From Brazil: Details of Arsenal transfer revealed – Move could cost from €4m to €16m

Chelsea youngster has offers from Serie A and Ligue 1 for...

Tottenham have lost out – Hertha Berlin agree fee for Piatek,...

From Brazil: Details of Arsenal transfer revealed – Move could cost...