Home Europe From Spain: Stoke City ‘convinced’ Flores will say yes and are in...
SHARE

On Thursday the word from Spain on Quique Sánchez Flores was that Espanyol hadn’t heard anything, so it was unlikely any move to Stoke City was imminent.

Friday’s edition of Mundo Deportivo reports that Stoke have made the Espanyol manager a ‘tempting’ offer and that they expect an answer today.

Stoke officials are said to already be in Barcelona to finalise a contract with Flores and are ‘convinced’ he’s going to say yes to their proposal.

QSF has a five year contract on offer and an assurance from Stoke there’ll be investment in the squad, which looks like it’ll be needed for any new manager.

No compensation is payable to Espanyol if their manager is taken, as per the terms of the 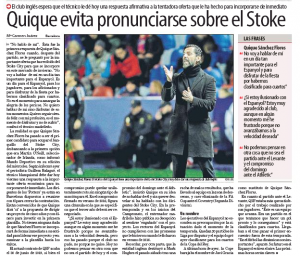 agreement when signed in 2016.

There’s every chance Flores fancies a return to the Premier League, having already managed Watford, and he may be frustrated with recent developments at Espanyol, with the owners perhaps meddling in the back-room staff.