There’s no better way to cover the weird stories from the Portuguese press than to explain how things happen step by step.

To start, let’s recall West Ham United had scouts at Porto’s game against Rio Ave last Sunday. We’ve covered the story and highlighted all the players who could have impressed the emissaries.

And today, newspaper O Jogo has a short story saying that West Ham United scouted Moussa Marega last weekend. It’s claimed the scouts were very impressed and could make a bid for him soon. O Jogo credits this information to the English website HITC. 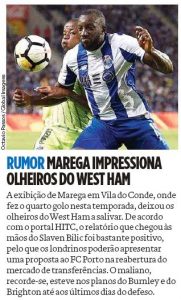 So we checked HITC, and they do have a scouting article similar to ours, but they didn’t say the Hammers would make a bid. It was just claimed that Marega could give the scouts something to think about.

It’s said that despite Marega’s display, West Ham actually went to see Danilo Pereira, a potential alternative for William Carvalho. But the information wasn’t originally theirs, as they were just covering what Notícias ao Minuto were saying.

Time to take a look at Notícias ao Minuto. They do have a story, where Marega doesn’t even get a mention. It was all about Danilo Pereira, and the Portuguese outlet were actually just covering a Hammers fansite called Claret & Hugh.

You get the picture, and we did check Claret & Hugh. In a very short article, they claim that West Ham scouted Danilo, and that the Porto player would be cheaper than Carvalho.

It doesn’t make much sense, because Danilo is more valued at Porto than Carvalho is at Sporting, and also has a release clause €15m higher than the rival midfielder.

But that’s just their opinion, and who knows if it could end up being true. It’s not Claret & Hugh’s fault the way the story kept going from England to Portugal, and becamse much bigger and misleading than expected.

With a bit of exaggeration here and there, West Ham will end up linked to Cristiano Ronaldo by the end of next week.