This is the second time the Hammers have sent officials to watch Porto already this season, as they already watched the club’s league game against Moreirense last month.

This time, the Portuguese league leaders managed to get an important 2-1 win, and now have 18 points after six games, sharing the top of the table with Sporting, and having a genuine title challenge ahead. 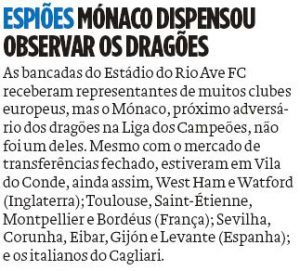 West Ham have been linked to several players from the Portuguese league this year, and three of them are from Porto.

The main of them was Danilo Pereira, who A Bola claimed to be an alternative to William Carvalho. Both players do a similar job, although the Porto midfielder is likely to be a bit more expensive.

Danilo had a great performance, scoring for Porto, and helping to protect the team’s defence.

With a €60m release clause, he’s been the club’s main man for a while and is unlikely to leave for an awful lot less than that, which west Ham may need to consider.

Yacine Brahimi is another one who was said to be wanted by the Hammers for a while, and despite being close to the exit door this summer, he ended up staying and convincing the club.

The winger had another good game on Sunday, being a constant threat to Rio Ave’s defence and making an assist for Porto’s second goal.

There were also links between West Ham Vincent Aboubakar, who spent the last season on loan at Besiktas and could be available for only €10m.

The striker couldn’t impress yesterday, and ended up being one of the most discreet players on the pitch.

Aboubakar may have disappointed, but his attacking partner Moussa Marega did pretty well. He didn’t need much company to create several chances and score once again. He now has four goals in six league games this season.