The Portuguese press is often criticised for making up rumours, or even feeding stories that don’t make sense. But they’re doing the opposite thing today.

After reading reports from the English and Mexican papers regarding an agreement between West Ham and Benfica for the transfer of Raul Jimenez, Lisbon outlets A Bola and Record come up with a different version.

In their Monday editions, both say there are no advanced talks for the player, despite Benfica and Jimenez both hoping a move to the Premier League happens. 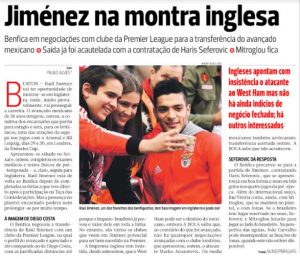 There’s no Portuguese information that a deal is close, according to the two newspapers, or that West Ham are making serious advances.

Benfica are currently at St George’s Park in England, and Record still insists that president Luis Filipe Vieira will make the trip to try to close some business.

Maybe these papers just have other information, since their Portuguese sources could brief them differently, but they don’t think a West Ham transfer is imminent.

With both Jimenez and Benfica keen on English deal, and that includes a move to West Ham, it would be no surprise to see Vieira seek talks with the club.