As Hector Herrera’s contract with Porto expires next summer and he doesn’t look like renewing it, the local press is starting to accept that he’s moving out of Portugal at the end of the season.

Today, newspaper Record brings a story about the ‘auction’ that is going on for him, taking claims from many different countries.

Considering recent reports, they list Roma, Inter Milan, Arsenal, Crystal Palace and Watford as those who would be in the race for the midfielder.

And it’s the Giallorossi who are leading it for now, as according to stories from Corriere Dello Sport, they would be offering €10m for Herrera. 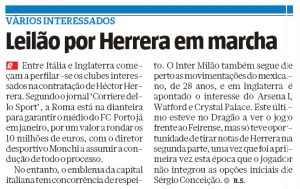 However, it’s pointed out that Herrera didn’t start the game, so the scouts could only take notes from his performance in the last few minutes of the match.

Now if Palace are indeed following Herrera that much, they better move quickly, because it’s possible that Porto accept a fee for him in January instead of losing him for nothing in the summer.