The Blues secured the forward from Ajax in a €40m deal earlier this week, moving quickly to sign up the highly-rated Morocco international ahead of the summer.

The forward is the latest player to shine for the Dutch club and was one of their star players in their run to the Champions League semi-finals last season.

Indeed, he has starred for them on the same stage again this year, putting in a star performance when Chelsea met Ajax in the group stages earlier this season.

He will arrive in England with a burgeoning reputation and the stats to match it, having managed 48 goals and 82 assists in 160 games at Ajax.

The Blues have been widely praised for getting the deal done, particularly at a very competitive price, and Ten Cate has backed him to shine in the Premier League.

“No, it’s a pity that he’s leaving the Netherlands because there aren’t many real quality players left,” he told De Telegraaf.

“I think Ziyech could become a sensation in the Premier League, though it could go two-ways. 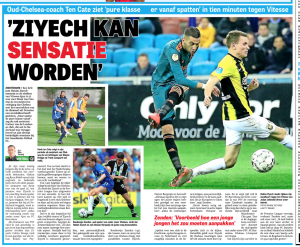 “The game in England is a lot more physical, and he’ll have to arm himself against that.

“But his football skills are beyond question. And especially because of the mental aspect.

“At the time he had moods, but he has grown completely out of that. Ziyech has grown up, a personality. That, coupled with his special football skills, makes him a top player.”