After a month or so of negotiations between Tahith Chong and Inter, it appears an agreement has been found and the player is looking more and more likely to leave Manchester United.

As was explained by Calciomercato, the forward has put talks with the Old Trafford on club regarding a renewal, keen to try his hand, or in this case, foot, elsewhere.

Gazzetta dello Sport have a bit more information on the matter, and seem far more confident about a deal getting completed than the website, reporting Beppe Marotta and Piero Ausilio finally managed to put an offer on the table that converted into a ‘significant handshake’.

The Manchester United youngster, should he move to Inter, would see himself earn on average €2m/year post tax over the next five years, starting with a lower wage (sub-€2m) with it rising each season to eventually become more than €2m/year. 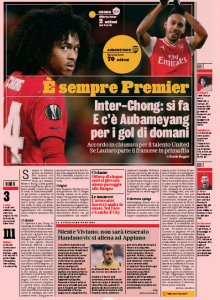 Gazzetta state the ‘hard part is over’, and the Serie A side feel they ‘have the player in hand’.

While it’s not 100% over the line, ‘the work is very well underway’, but they need to be careful ‘because all the details that are usually important in cases of expiring players must be considered’.

However, ‘the optimism is real’, and it’s added there will be ‘no passage to Jiangsu Suning’, meaning Chong won’t have to go to China first.