Home Europe “Club’s plan not yet communicated to me” – Everton player not sure...
SHARE

The 22-year-old has just finished a loan spell at Sporting, where he played for one year, and now made an evaluation of the season he’s just had, as he’s still not sure of where he’ll be featuring next season.

Virgínia started talking by recalling his decision to join Sporting at the start of the season.

“I was looking for a loan to have more playing time and the opportunity came to play for one of the biggest clubs in Portugal, the national champion,” Virgínia told A Bola.

“Mr. Jorge Vital spoke to me, I had already heard very good things about him and I could confirm it, impeccable! It helped me a lot this time. I’m sure that coming to Sporting was the right step for me, even though I didn’t play as much as I wanted to.” 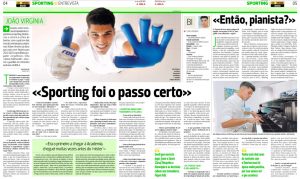 Virgínia only made eight appearances for Sporting this season, with Spanish goalkeeper Adán continuing to be their number one option for the entire year. Still, the Everton player claims he knew the spell was going to be like this.

“Exactly, but I knew what context it came to. Adan is a great goalkeeper, a very good professional, with his experience.”

With manager Ruben Amorim confirming that Sporting will try to keep him, Virgínia only claims to be glad of it.

“I know that, of course, and it makes me proud. And I leave the season with the happiness of having conveyed a good image. I know I have an open door at every club I’ve represented and this season has been spectacular.”

Now regarding his return to Everton, the player claims he has still not been told by the Toffees about his future, claiming he’s prepared to play in case Frank Lampard includes him in the squad.

“I have two more years on my contract with Everton and Everton are also in a situation where they will need a goalkeeper, but the club’s plan has not yet been communicated to me. I feel, however, that I’m ready to play. At Sporting, at Everton, or at any other club in Europe, because I really believe in the work I have done. It was a very positive time, so we’ll see what happens.”