Everton midfielder Allan has been ‘offered’ to Lazio and could leave Goodison Park this summer.

That’s according to Corriere dello Sport, who say the midfielder is an option ‘not to be discarded’ for former manager Maurizio Sarri.

They explain that the Lazio boss, who worked alongside the player at Napoli and arguably got the best years of his career out of him, is thinking about a reunion at his new club.

He’s an option that cannot be overlooked because he ‘has been pushing’ to secure a move away from Everton this summer.

That’s because he’s set to enter the final year of his deal, and it would make sense for the Toffees to sell now if they don’t intend to offer a renewal rather than lose him on a free next year.

It’s that which makes a deal possible for Lazio, who see him as a ‘dream’ signing, but the newspaper makes clear it won’t be easy for them to get Allan on the cheap, particularly after Everton paid €28m for him in 2020. 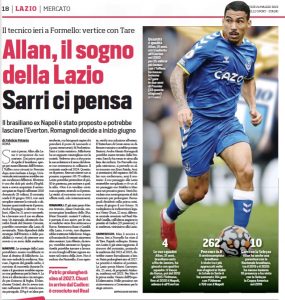 There is also the issue of his salary, which is €4m per year at Goodison Park and would be hard for the Italian side to match.

Allan, though, would like to reunite with his former manager and the club could take advantage of the Italian Growth Decree and exploit the tax benefits involved in that to bring them closer to what the Brazilian would want.

Everything, though, depends on Everton’s ‘strategies’ this summer and whether they are willing to offer a ‘discount’ because Allan is in the final year of his contract.