Announced on Monday, Aston Villa’s signing of Boubacar Kamara raised a number of eyebrows both in France and Spain.

Snubbing Champions League football at both Marseille and Atlético Madrid to join Steven Gerrard in the Premier League, the versatile French player’s decision has left a few in the south of France ‘pinching themselves’.

The big question here is whether this was solely a sporting decision by the 22-year-old, especially when he is fresh from being picked by Didier Deschamps in a France national team squad for the upcoming UEFA Nations League games against Denmark, Austria and Croatia.

This is all what La Provence put forward on Tuesday, looking at Kamara’s decision, and point out ‘it looks a lot’ like the player chose money over the rest. 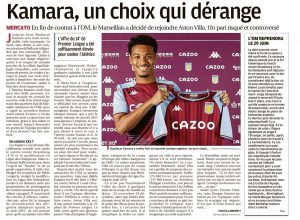 After all, whatever Aston Villa offered him appears ‘substantial enough’ for him to turn down Atlético Madrid, and it could be that he’s simply ‘taking a gamble’.

The idea here could be to sign for the Villans in the hope of impressing enough in a short amount of time to then be sold for a profit (he is arriving on a free after all) down the line in a deal that would suit both Gerrard’s side and the footballer.

Either way, his choice to go to Aston Villa is one that hasn’t really gone down too well south of the Channel, and only time will tell if it was the right one.