Home Europe Club ‘will not give up’ on signing Liverpool player – He’s keen...
SHARE

It took a while for Marko Grujic to be convincing at FC Porto in his loan spell from Liverpool.

During last season, the Portuguese media wouldn’t even talk about the chances of a permanent move. Then with the midfielder finally adapting, we started seeing a couple of stories about a potential purchase here and there.

Now things get to a new level today, as Grujic is on the front page of local Porto newspaper O Jogo, who says he’s become a ‘priority’ for the club in this transfer window.

It’s said the 25-year-old wants to stay with the Dragons, and manager Sérgio Conceição has a place reserved for him. The issue now is to find an agreement with Liverpool. 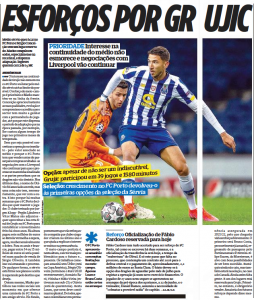 Following Grujic’s good final months at Porto, Liverpool are now hopeful they could make a profit with his sale. After spending €7m to sign him from Red Star in 2016, the Reds would now like to get about €15m with his departure.

Porto have no way of paying that now, unless they sell midfielder Sérgio Oliveira. So the club’s strategy is to carry on with the talks to at least show they’re in the race for the player and ‘will not give up’.

Even though Liverpool have recently been linked to Dragons’ midfielder Otávio, O Jogo once again makes it clear that one deal wouldn’t have anything to do with the other.