Home Europe Everton have ‘tested the waters’ for defender – Price has gone up...
SHARE

Although the Netherlands were unceremoniously dumped out of the Euros by the Czech Republic, there were a number of standout performers in their team.

One of those was Denzel Dumfries, who became the star of the team with his galavanting runs down the right hand side of the pitch, scoring two goals and picking up an assist in his four appearances.

Everton were one of the teams interested prior to the tournament, most likely due to Marcel Brands having already worked with him in the past at PSV Eindhoven, and that remains the case to this day.

Corriere dello Sport explain this by saying that both Inter and the Toffees have ‘tested the waters’ for the right-back, with both teams needing reinforcements at the position this summer. 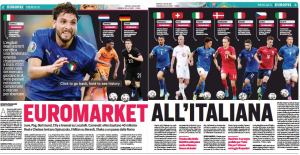 The problem for Everton was that his pre-tournament price was around €15m, but that has increased to €20-25m, according to the Italian newspaper.

We’ll have to see whether the newly appointed Rafa Benitez will be on board with this particular transfer, because if he is, Brands and Moshiri might just about be willing to see it through to please their manager.