Despite a headline in the Italian media claiming that Arsenal’s new offer for Arthur was now concrete, it appears they were jumping the gun a bit.

That’s what Gazzetta dello Sport were saying on Thursday, but the stance on Friday is a little bit different.

The same newspaper state that we are now in the ‘days of waiting’ for the Brazilian’s potential transfer to the Emirates, as both the player and Juventus ‘await the next move’ from the Premier League side.

As has been reported elsewhere, Arsenal’s first idea was to bring Arthur in on loan for six months ‘with payment of his salary’, but the former Barcelona man and his side ‘would prefer a longer-term solution’ i.e. an 18 month loan or him being bought outright in June.

That being said, it’s explained the Gunners ‘said they were willing to change their offer and new contacts are expected in the coming days’.

Corriere dello Sport have something very similar on Friday, making it clear that ‘Arsenal want Arthur and Arthur wants Arsenal’, but the ’distance between the two clubs is still wide’.

The six month loan is also mentioned, but they report that the Gunners wanted ‘the right of redemption to be discussed at the end of the season’.

Juventus’ counter-offer, however, was to ask for ‘the loan to be onerous, even extended to 18 months so that, overall, it can bring to the coffers of the Bianconeri a figure close to €50m’. 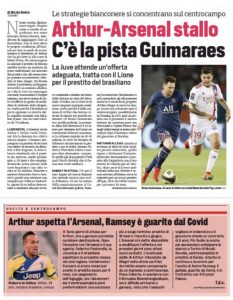 We assume that means with the purchase of the player included, but ‘being able to get Juve and Arsenal to agree is not an easy mission’ for Federico Pastorello, Arthur’s agent.

Juventus are demanding this much because if they allow their player to go, they need to replace him, and the idea would be to replace a Brazilian with another, with Lyon’s Bruno Guimaraes reportedly their target.

It’s all a bit of a mess right now, and we’ll have to see, with time starting to slowly run out in the transfer window, if Pastorello can work his magic once again.