Home Europe Doubt whether Conte is ‘really a fan’ of Tottenham player, despite comments...
SHARE

Earlier this week, Tottenham Hotspur came from behind to beat Leicester City 3-2. Steven Bergwijn starred for his side, first scoring an equaliser in the 94th minute and then netting the winner in the 96th minute.

De Telegraaf claim the forward is drawing attention from elsewhere, with Ajax showing ‘most concrete’ interest. However, an exit is unlikely after his heroic display against the Foxes.

After scoring the brace to help Spurs defeat Leicester, Antonio Conte was in full praise of the 24-year-old.

“I have always been very clear about Steven. He is an important player for me because he has qualities that not many players in our squad have. He is very creative. If he is fit, he can start in the starting line-up or change the game as a substitute. I think he would also like to stay with us,” the Italian said.

Despite Conte making his views clear about the Netherlands international, De Telegraaf are not convinced.

They state: ‘It should be noted that Conte will never tell the outside world that a player can leave, especially if he has just scored two important goals. And if the Italian manager is really such a fan of the Dutchman, it might be useful to give him a little more minutes, you would think.’

The newspaper explains that for the ex-Chelsea manager, Bergwijn is either a striker or the ‘most offensive midfielder’. These two positions are generally occupied by Harry Kane and Heung-min Son.

De Telegraaf add that it is an open secret that Conte wants to expand his squad and not downsize it in the winter market. In addition to this, Spurs chairman Daniel Levy is ‘not eager’ to let go of the player. 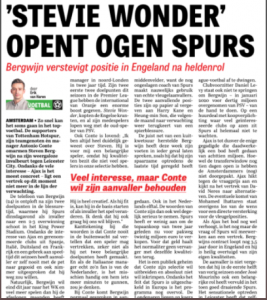 With several suitors, most of them are looking to take Bergwijn on loan with an obligation to buy, and Tottenham are certainly not interested in this formula.

It remains to be seen whether Levy and Spurs will allow the Dutchman to leave the club this month, if Ajax were to improve their offer.