On Wednesday evening, reports from the Italian media claimed that Arthur Melo’s agent Frederico Pastorello was spotted at Arsenal’s training ground to discuss the move.

Now the outcomes of this meeting are explained by Italian ewspaper Gazzetta Dello Sport, who in a story today, reveals the details of the conversation.

They claim the ‘blitz’ made by the Gunners worked to ‘make it clear’ that the London side are ‘willing to go beyond’ the initial idea, which had been for a dry loan.

Now the clubs are set to find the ‘right path’ for an agreement, while the player seems very interested in the transfer, but it’s claimed that Arsenal’s offer is ‘now concrete’. 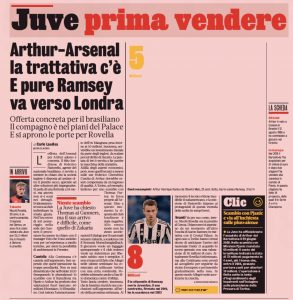 It’s said that Pastorello made it clear to Edu Gaspar that Arthur wants a ‘medium-term experience’ at Arsenal, as his intention is to have time to settle in the Premier League.

It’s just not clear yet how much Juventus will ask for a permanent move, if that does end up being negotiated.

Gazzetta points out that following the swap between him and Miralem Pjanic which brought the Brazilian from Barcelona, his weight on the Serie A side’s books still stands at around €50m.

It’s said that yesterday’s talks ‘served to start the negotiation machine’, seemingly to sort out the details after Arsenal’s ‘concrete’ offer was made.