Two days ago, Le10 Sport reported the forward is closely followed by the La Liga winners. They also explained the 30-year-old has postponed contract talks with the Gunners.

His current deal at the Emirates expires in 2021 and reports in England suggested the Gabon international wants to see whether or not Unai Emery’s side will qualify for next season’s Champions League.

Friday’s edition of Mundo Deportivo has picked up these claims and it’s stated the Catalan club ‘values’ the former Borussia Dortmund star’s qualities. 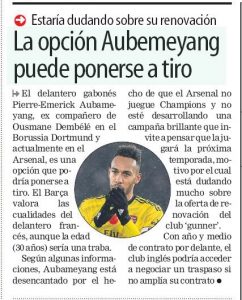 However, the player’s age (he’ll turn 31 next June) would be an obstacle for Ernesto Valverde’s side in signing him.

Mundo adds that Arsenal could agree to negotiate his transfer next summer, if Aubameyang decides not to renew his contract with the Premier League side.