Barcelona were in the race to win the treble last season, but their dreams were crushed in a matter of weeks and they had to settle for only the league title.

After taking a 3-0 lead in the first leg of the Champions League semi-final against Liverpool, Ernesto Valverde saw his men suffer a 4-0 defeat in the second leg at Anfield in May.

Later that month, the Catalan club lost the Copa del Rey final to Valencia and Luis Suárez missed the clash against Los Ches due to injury.

Just days after the defeat to the Reds, it was confirmed the Uruguay international would miss the Copa del Rey final after he opted to undergo knee surgery.

A section of supporters of the Camp Nou club were highly critical towards the South American and there were even suggestions that he decided to go under the knife in order to be fit in time for the 2019 Copa America.

Suárez has now explained the situation was different while rubbishing the false claims made against him.

“I already said it in Uruguay. If I ask you, who writes, if a hand cracks and the doctor tells you have this injury can you write? No, it is difficult. I had a broken meniscus. How can I contradict the doctor? It’s impossible.”

“Things were invented [about me]. The injury I had last year at the beginning was cartilage, it had nothing to do with the meniscus.” 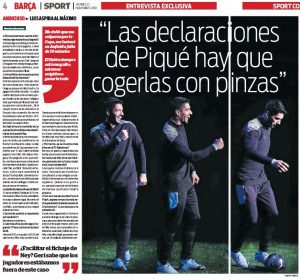 Suárez also revealed he suffered this injury in the final minutes of the Champions League clash at Liverpool.

“Yes, it was at Anfield. It was in the last 10-15 minutes. With the adrenaline, I didn’t feel the pain. In the dressing room I ended up in pain, with ice, but I’m not going to clarify things anymore,” the Barca star stressed.