Manchester United star Anthony Martial is one of the targets Inter Milan have for the summer window, according to claims from Italy.

Newspaper Tuttosport says the Nerazzurri will soon be looking for a replacement for Lautaro Martinez, who could be leaving for Barcelona in a deal worth up to €150m.

The outlet claims that Arsenal’s Pierre-Emerick Aubameyang emerges as the favourite option, but Martial is seen the younger alternative.

It’s said that director Piero Ausilio has always liked the Frenchman, having tried to sign him in the past few windows, especially when Manchester United were interested in Ivan Perisic.

That was well reported at the time, so there may well be something in their interest. 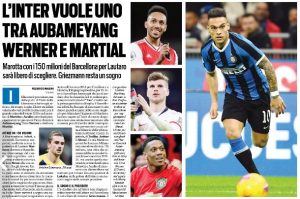 Tuttosport claims Martial would cost Inter between €60m and €70m. That’s their estimate, the English slant may be very different.

As it stands, Martial is just one of a number of options, and there’s no claims of talks or even contact being made.