With Tottenham going strongly after Milan Škriniar and Diego Godín moving to Cagliari on a free transfer, Inter are going to need a centre-back before the end of the window.

They have a few names in mind, with Fiorentina’s Nikola Milenković top of the list, but his price is currently putting them off.

That’s where Chris Smalling comes in, as the Manchester United defender continues to wait for a return to Rome following a successful loan spell at AS Roma last season.

The Serie A side have yet to meet Ed Woodward’s demands of €20m, which has allowed Inter to join the list of potential suitors.

Corriere dello Sport look at the situation on Friday, explaining ‘the dream’ remains Milenković, but the ‘most likely option’ is United’s Chris Smalling. 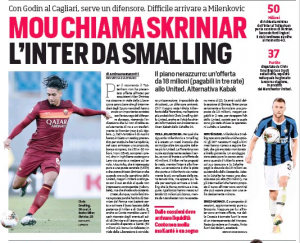 Roma have so far only put €12m plus bonuses on the table, but Inter are ready to trump that ‘if they have the money from the sale of Škriniar’, and are ‘seriously thinking about formulating a proposal of €18m, perhaps payable in three instalments, to snatch the OK’ from the Red Devils.

Having already closed deals for Romelu Lukaku, Alexis Sánchez and even Ashley Young in recent years, the relationship between the two clubs is optimal to say the least, giving them something of an advantage when it comes to this deal.

There’s still plenty of time left, and this could be one that goes down to the wire, but also appears to be entirely dependant on the Slovakian’s potential move to Tottenham.