With Juventus seemingly keen to get the band back together this summer, the idea of Moise Kean returning from Everton was inevitable.

The Italian youngster has struggled since moving to Goodison Park last summer, and for several weeks now there have been rumours about him being keen on the return to Juve.

That is something his agent Mino Raiola is said to be working on, with a report yesterday stating that he needs to convince Everton to let the striker go.

Tuttosport pick up on it today and say that Kean is ‘definitely the first option’ for Juventus this summer and they have ‘long been looking’ to find an understanding with Everton.

They are not keen on letting Kean go, despite the youngster being more than willing to make a return to the Bianconero.

If they were to sanction a sale, it would have to be for at least €22m so they wouldn’t ‘lose capital’ on the €27.5m they paid just a year ago.

That is a price that Juventus cannot afford at this moment in time, and may not be able to even if they were to sell some of their unwanted squad players, such as Douglas Costa, whose funds would instead be reinvested in Federico Chiesa.

Everton also ‘do not welcome’ the idea of a loan deal, even though Juve argue that a year back in Italy could help them to ‘re-evaluate their investment’. 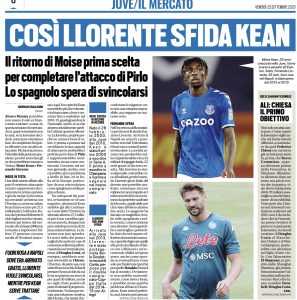 A ‘creative solution’ therefore needs to be found, something that Raiola is presumably working on at this moment in time.

And, according to Rai Sport journalist Paolo Paganini, he held talks with Juventus last week about the potential transfer.

“Anyone else in attack after Morata? They talked about Kean last Friday with Raiola; there is this possibility,” he told Radio Biaconera, relayed by TuttoJuve.

“There is an agreement between the agent and the player; we need to convince Everton after they have invested so much in this boy.

“Juventus at this time cannot spend without first selling players who do not fit into the club’s plans.”