Prior to the January transfer window, we covered a number of stories that Italian clubs were thinking about making a move for Everton’s Moise Kean.

It was only on loan, mind, but there was a belief the young Italian would be open to a return home to get some game time, especially since his first few months at Goodison Park under Marco Silva didn’t exactly go to plan.

The arrival of Carlo Ancelotti changed things a bit, but the idea never really vanished from those clubs’ minds, with Bologna being one of them.

Gazzetta dello Sport take a look at what Sinisa Mihajlovic has planned for the Serie A side going forward, and one of them is to strengthen the attack.

The Italian newspaper write that, with that in mind, ‘they could reopen the Kean idea’, suggesting a move for the Everton forward has been touted as a possible avenue for Bologna to explore in the summer after already giving it a go a few months back. 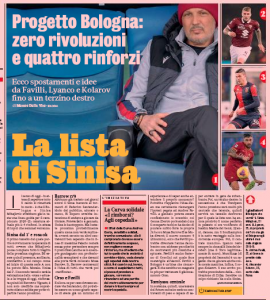 Since the 20-year-old appears a bit happier under Ancelotti and the plan at Goodison Park appears to be to build a young and enthusiastic team rather than relying on the old guard, you would suspect the Toffees would be reluctant to let him go.

However, if the player feels he could get more game time elsewhere on a temporary basis, he might push for a move, just to make sure his development doesn’t stagnate too much.

That’s just us speculating, of course, and we’ll have to see what Everton decide to do going forward, but a front three of Richarlison, Kean and Dominic Calvert-Lewin in the long-run doesn’t sound too awful, does it?