Seemingly focusing on youth under Ole Gunnar Solskjaer, it isn’t that much of a surprise to hear about Manchester United looking at one of the most talented youngsters in Italy.

We are talking about Sandro Tonali, currently at Brescia, who is the talk of the town in the local newspapers as he edges closer to Inter.

Corriere dello Sport explain the ‘outline of a deal’ between the two Italian sides exists and an ‘armoured agreement’ has been reached with the player, with Massimo Cellino is ‘pushing’ for the transfer to be done.

Tonali would initially be loaned with an obligation to buy at €35m that could rise up to €40m with bonuses.

This agreement with the player is now said to ‘protect’ Inter from any other clubs trying to insert themselves in an operation for the midfielder. 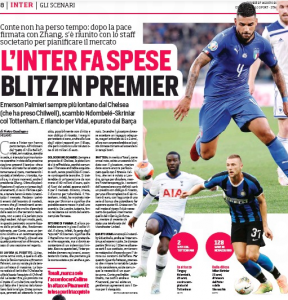 While Milan are said to have ‘vanished’, seemingly focusing on Tiemoué Bakayoko these days, there was ‘recently a phone call from Manchester United’.

There had been previous claims Tonali wanted to stay in Italy to continue his development, so that might have something to do with his decision to prioritise Inter.

Either that, or Ed Woodward, not for the first time, just turned up too late.

Chelsea make ‘contact with agent’ in London for defender signing –...

Fulham target training away from his club – Cottagers move labelled...