Home Premier League Arsenal Arsenal asking price for defender ‘does not seem to be less than...
SHARE

A couple of days ago, we covered report from Italy claiming Andrea Pirlo had made a request to those above he needed a right-back, with Arsenal’s Hector Bellerín top of his list.

There was also some brief interest from Paris Saint-Germain being talked about in France, but it appears it’s Juventus who are the keenest on the Spaniard, at least according to Corriere dello Sport.

The newspaper push the same line as Calciomercato did in theirs, which is that Pirlo has made it clear he wants the Arsenal player.

Contacts had even been ‘initiated’ between the two clubs, but ‘there does not seem to be too many margins regarding any technical counterparts’ being inserted to lower the cash amount, but the ‘right offer can start’ talks. 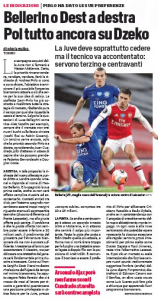 However, and it’s the main issue for Juventus, Arsenal’s asking price ‘does not seem to be less than €30m cash’, and while ‘the player’s satisfaction’ with the Juventus adventure ‘is there, but it is still not enough’.

It’s said the club are ‘hard at work’ to please Pirlo for his first season in charge, but to get Bellerín, ‘it will be essential’ to first make some sales.