The Portuguese media has returned to claiming David Tavares should be on his way to Nottingham Forest soon.

According to newspaper Record today, the Benfica midfielder is ‘close’ to joining the Championship side.

Their short report says negotiations for this move are well advanced and can be concluded in the coming days.

Record recalls that they had already reported the possibility of this move last week, and they believe it should finally happen this time. 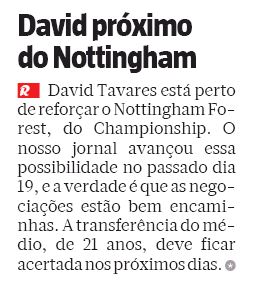 When A Bola covered those claims last week, they said they didn’t know much about this move to the Championship, but confirmed that Tavares should leave Benfica on a loan deal this summer.

Therefore, and given they haven’t provided any further clarity, a loan looks the likeliest scenario.

David Tavares has a contract with the Eagles until 2024, and is protected by a €66m release clause. He hasn’t been getting many chances to play for the Lisbon side, and has only two appearances for their first team so far.