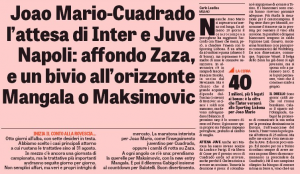 Juan Cuadrado’s pending departure from Chelsea is taking more time than was initially expected. The Colombian international is reportedly keen on returning to Juventus, where he enjoyed success last season, but there has been an unexpected delay.

Yesterday, Gazzetta dello Sport reported a meeting between Chelsea and Cuadrado’s agent could take place on Tuesday, or at the latest on Wednesday.

Chelsea want Juventus to pay €4m for the loan, and there were also claims of a two-year loan deal with an option to buy.

According to Gazzetta on Wednesday, Juventus’ CEO Giuseppe Marotta has been waiting for news from London. Gazzetta say the reason for delay is because Chelsea are struggling to find a replacement.

The Italian newspaper believe that regardless of the delay, the decision has been made and the Serie A club have received adequate guarantees. They just have to wait for Antonio Conte to bring someone in before they can complete a deal.