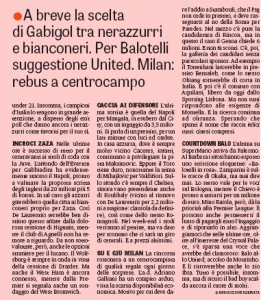 Crystal Palace have already signed Christian Benteke in a big money move from Liverpool, but it appears they’re interested in another striker from Merseyside.

Balotelli’s agent Mino Raiola prefers his client moving to another Premier League club as they can afford the financial terms of any possible deal. That would probably suit Liverpool too financially, although it may be embarrassing if he rediscovers his best form.

Several Serie A clubs are reportedly also keen on signing Balotelli, and Gazzetta even throw in Manchester United, just for the drama.

Liverpool have been desperately trying to offload Balotelli all summer, and it’d be interesting to see if Alan Pardew is genuinely keen on the Italian striker. Getting some form out of Balotelli may well be tempting for Pardew’s ego, but the signing of Benteke may make that less likely.