On April 21st, Manchester United announced the Erik ten Hag will be their new permanent manager from next season.

A day later, the Red Devils started getting linked with Barcelona midfielder Frenkie de Jong, who arrived at the club from Ajax in 2019, after playing under Ten Hag’s orders for two years, where he was one of the key members of the Eredivisie side’s squad.

De Jong has had mixed performances after Xavi Hernández replaced Ronald Koeman last November and he is now said to be on Manchester United’s agenda for the summer.

On April 26th, AS stated it is an ‘open secret’ that the incoming manager wants the 24-year-old at Manchester United.

A day later, Sport explained Ten Hag wants to make the Netherlands international the ‘cornerstone’ of his new project at Old Trafford.

Tuesday’s edition of AS explain the former Ajax star is ‘wanted’ by Manchester United and Bayern Munich.

Although Xavi has praised De Jong in public, the newspaper explains the La Liga side have ‘decided in recent weeks to put up the Dutch midfielder up for sale’.

The Catalan club’s ‘objective’ is to obtain around €70m from his sale after this season.

According to AS, De Jong’s departure from the Camp Nou in the summer will be ‘key’ for Barcelona to sign Valencia’s Carlos Soler. 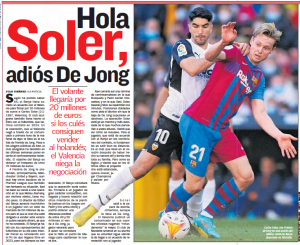 Although Los Ches have already denied reaching an agreement with the Blaugrana for the Spaniard’s sale, AS continue to insist the two clubs have ‘closed an agreement’ for €20m.

They further add Barcelona also have a deal in place with the player.

To sum up the report, De Jong is ‘wanted’ by Manchester United and Barcelona have decided to sell him in the next window, with his exit ‘key’ for his current club’s attempts to sign Soler from Valencia.