On April 26th, AS reported that it is an ‘open secret’ incoming Manchester United boss Erik ten Hag is an admirer of Frenkie de Jong and wants the Barcelona player at Old Trafford.

It was also explained the 24-year-old is going through a rough patch following his ‘highly disappointing’ displays in the recent fixtures.

The 52-year-old, who managed the midfielder at Ajax, will leave the Eredivisie side at the end of this season and join Manchester United.

Sport on Wednesday explain the Red Devils are ‘on the prowl’ for the 24-year-old. They also add Ten Hag is thinking about making the Netherlands international the ‘cornerstone’ of his ‘winning project’ in Manchester.

It’s said Ten Hag has no doubts about the La Liga player’s performances and is ‘capable of bringing out his best version’, after irregular displays at Barcelona. Manchester United are not alone in the race for Xavi Hernández’s man.

The newspaper states Bayern Munich are ‘thinking of him’ to reinforce their midfield next season. Julian Nagelsmann is in love with the Dutchman and has asked his side’s leaders to be attentive of his situation at the Camp Nou.

The Bavarian club are ‘not proactive’, but ‘want to be on the list’ in case Barca decide to listen to offers for De Jong.

Barca, meanwhile, are ‘very interested’ in Robert Lewandowski. If the Pole were to push for a move to the Catalan club, then a deal could be worked out with both players.

As it stands, Xavi’s side are not thinking of selling De Jong. However, a possible transfer in 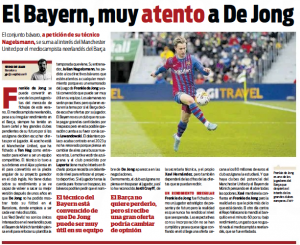 the summer would depend on the offers they are going to receive for him. If there is a proposal ‘close to €80m’, Barca ‘will study it’.