Trabzonspor are reported to be in the market for central defenders this window and they’re interested in Everton’s Matthew Pennington, reports Star.

The Turkish newspaper claims Karadeniz Firtinasi have already opened talks with the Merseyside club for the 24 year old, and they believe signing Pennington could be a great piece of business.

Star reports Trabzonspor’s scouting team have identified Pennington as a target and the Turkish club are hoping they can convince Everton over a loan deal.

Last season the English defender was loaned out to Championship side Ipswich Town and he made 30 appearances in the league.

Pennington has also had loan spells with Leeds United and Walsall in recent seasons and it seems another move away from Everton could be on the cards.

With the competition for the central defensive positions at Everton it seems likely the player will need to find another club this summer.

Coming through the Everton youth academy the player has failed to hold down a place in the first team, leading to the loan moves. 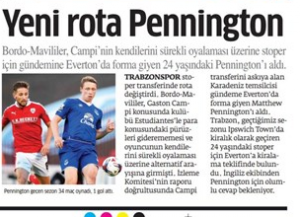 The youngster is under contract at Goodison Park until June 2021.