Turkish newspaper Fanatik report Fenerbahce have started the operation to replace Vedat Muriqi at the end of the season, with the Kosovo international likely to leave the club.

One option for the Yellow Canaries is said to Chelsea forward Olivier Giroud and Fanatik claim his contract situation makes him a prime target for Fenerbahce ahead of the summer transfer window.

The French striker will become a free agent at the end of the season and the Turkish newspaper claim Fener will make it their priority to bring in out-of-contract players due to their financial situation.

The other option for the Turkish giants is Zenit’s Artem Dzyuba, who will also become a free agent at the end of this campaign. 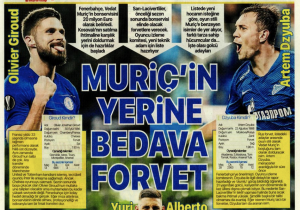 It’s reported Fenerbahce have already started investigating the players’ situations at their clubs, with Chelsea’s Giroud said to be their leading choice because of his quality and professionalism.

The 33 year old has only managed to make 13 appearances for Frank Lampard’s side this season, but had been featuring more before the coronavirus outbreak. He’s free to speak to clubs from overseas with regards to a pre-contract agreement.