Born in London but seemingly electing to play for France (one cap for their U21s so far), Michael Olise has really started to show what he is capable of this season at a higher level for Crystal Palace.

Arriving from Reading last summer for a relatively hefty fee of £8m+, the 20-year-old hasn’t been a regular starter throughout the season, but has certainly been given plenty of opportunities by Patrick Vieira.

He’s made the most of them too, scoring four goals and assisting another eight in 31 appearances for Crystal Palace’s first-team, which has caught the eye of Lille.

That’s according to La Voix des Sports on Monday, who look at what could happen at the Ligue 1 side this summer, where change is expected.

The primary focus is for them to recruit two wingers, with the first expected to be Denis Bouanga from Saint-Etienne.

The other is likely to be a bit more expensive if they do go for one of the two options touted: Crystal Palace’s Michael Olise and Feyenoord’s Luis Sinisterra. 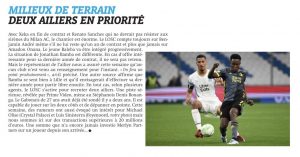 It’s made clear that either would involve ‘transactions superior to €20m’, which is a fee that has never been spent by new owners Merlyn Partners since their arrival, and would represent a hefty investment.

We’ll have to wait and see, because a lot will depend on Lille’s ability to spend this year, but if they present Olise with an opportunity to be a key member of their squad followed by a promise of a bigger transfer down the line, perhaps it’s something the Crystal Palace youngster could be interested in.

After all, if he can follow in the footsteps of Nicolas Pépé (ignoring what’s happened at Arsenal since) or Victor Osimhen by using Lille as a very useful stepping stone, it might be worth it.