With Benfica losing to FC Porto and basically handing their rivals the league title at the weekend, it was a melancholic end of season for the Eagles, who are now set to focus on their summer transfer business.

The biggest deal the club should be involved in is, obviously, the sale of striker Darwin Nunez, who scored 34 goals so far and is about to leave for a huge fee.

And as Portugal’s biggest sports newspapers write about the striker, it’s inevitable to see a couple of mentions of Manchester United, who continue to be named as strong contenders to land him this summer.

Record today writes the Red Devils ‘don’t let go of him’, ‘as they count on the scorer’ for next season to renew their attack.

The newspaper takes a couple of claims from the English media to say the likes of Edinson Cavani and Marcus Rashford could leave Old Trafford this summer, but they make it sound like the rest is all their information. 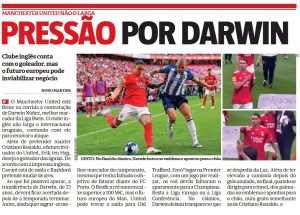 Record says Darwin’s transfer, not making clear where to, should be agreed once the season is over. They say Benfica believe they can make over €100m, and Manchester United’s failure to get a spot in Europe’s top competitions could be an issue for the Red Devils in this race.

At the end of the game against Porto, the striker said something to fans and pointed to the ground. Record describes it as a ‘gesture similar to Cristiano Ronaldo’s’.

A Bola, however, points out that even though many fans understood him saying ‘I’m going to stay here’, it’s actually claimed he was telling them something like ‘my heart stays here’.