Barcelona allowed Marlon to join Ligue 1 side OGN Nice on a two-year loan deal last summer, which included an option for the French club to sign him on a permanent deal.

The 22-year-old impressed for Nice so much so that he has emerged as a transfer target for West Ham United. Over the past few weeks, we’ve carried several reports talking about the London club’s interest in the player.

On June 12th, we carried a report from Mundo Deportivo, who claimed Barcelona were demanding €25m, while West Ham were ready to pay only €15m.

Four days ago, the same publication mentioned the Hammers are “in pole position” to sign the defender, whilst also talking about interest from an unnamed Premier League club.

Today’s edition of Mundo Deportivo claims Barcelona have plans in place to sanction the sale of a few players, whose services are no longer required at Camp Nou. Marlon is one player mentioned in the list and they have once again talked about West Ham.

When auditing of a European football club, the financial year starts on July 1st and ends of June 30th of the next calendar year. Any signing that will be completed this month will be taken into account of the current financial year, while if it’s done in July then it will be calculated for the next financial year. 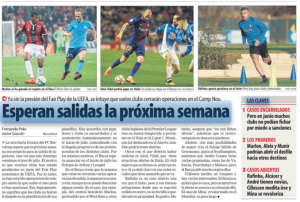 The report mentions players, including Marlon could leave Barcelona ‘next week’ because of the above mentioned reason. So far, only West Ham are mentioned as the only possible destination for the South American defender.

Barcelona ‘hope’ to see a few of their players, including Marlon, leave the club in the first week of July.