Home Europe ‘Agreement with agent’ of player to join Barcelona, and another is set...
SHARE

Sevilla defender Clement Lenglet has been heavily linked with a move to Barcelona in the past few months. The Frenchman has been one of the standout players for the Andalusian club since joining them 18 months ago from Ligue 1 side Nancy.

We carried a report from Mundo Deportivo on June 28th, who claimed the player’s entourage spoke to the Catalan newspaper about his decision to join Ernesto Valverde’s side this summer.

Eric Abidal replaced Robert Fernandez as the La Liga winners’ new technical secretary, and has been weighing up signing other central defenders who can play in more than one position. The former defender had a “certain reluctance” in signing his compatriot for Barcelona, however, there has been no change in plans to sign Lenglet from Sevilla. 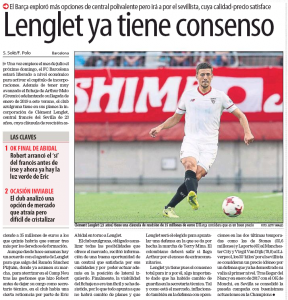 Mundo claims there is an “agreement with Lenglet’s agent” to leave Sevilla and join Barcelona this summer.

He has a €35m release clause and the price tag is considered “suitable”.

Lenglet’s arrival at Camp Nou will force Barcelona to sanction Yerry Mina’s transfer. The Colombian international arrived at the club in January and will leave the La Liga winners in the summer.