Having joined Watford from Anderlecht in January 2018, the English club allowed Dodi Lukebakio to join Fortuna Düsseldorf on a season-long loan deal.

The 21-year-old has impressed with his displays this season, scoring 12 goals and registering five assists in all competitions, which includes a hat-trick against Bayern Munich.

His impressive form hasn’t gone unnoticed, if claims from Germany are to be believed.

According to Sport Bild, Fortuna want to secure his services on a permanent deal, while Borussia Dortmund, Borussia Mönchengladbach and a few clubs in England have the Belgian in their sights.

It’s claimed that Fortuna are keen on retaining him beyond this season, even though they don’t have an option to make his loan move permanent. For this reason, the German club had scheduled a ‘secret meeting’ with the Premier League outfit’s leaders to discuss the player.

Lukebakio’s market value is said to be around €6m and he is open to the idea of making a permanent switch to Fortuna. That figure has come from Transfermarkt, say SportBild, and really has no relevance to reality. 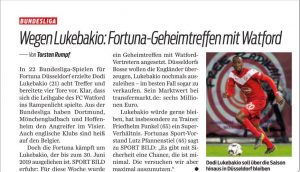 If Watford do consider an exit it’ll be for a higher amount.