Home Europe Liverpool have ‘signaled their interest’ in player, current club could pressure him...
SHARE

At the end of 2018, we covered a report from Sport, who claimed that Jurgen Klopp follows RB Leipzig’s Timo Werner ‘very closely’ and the manager doesn’t want Liverpool to miss an opportunity to sign him.

Sport Bild has brought an update about the Germany international, who has been on the radar of several clubs, including the Reds and Bayern Munich.

The Bundesliga winners have Robert Lewandowski, whose contract at the Allianz Arena runs down in 2021. The report claims the Bavarians are planning to extend the striker’s contract by further two years and this could have an impact on Bayern’s chances of signing the 23-year-old.

Werner’s contract at Leipzig will expire at the end of next season and they’re looking to sanction his sale in the summer, if he decides not to renew his contract. The price tag quoted by Sport Bild is €60m.

Bayern are undeterred by the asking price and if the player doesn’t sign an extension, Leipzig wants to put pressure on him by bringing in a new attacker after this campaign.

If Werner’s sidelined next term, it could have an impact on his chances of making it to Euro 2020 with the national team. To avoid such a situation, it is claimed that Leipzig will hope the forward will accept to leave the club. 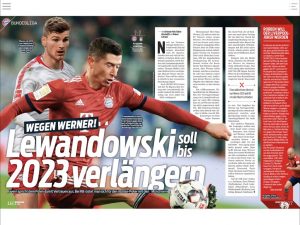 Sport Bild mentions the Merseyside club as they explain the Premier League outfit have ‘signaled their interest’ in Werner.

If Lewandowski signs an extension, it could provide a boost for Liverpool in their efforts to sign Werner.

SportBild have continually linked Liverpool with the player, but there’s never felt anything especially serious about the claims.