On December 28th, we relayed news from Spain that Anthony Martial is the ‘desired option’ for Sevilla, and the Manchester United star will have ‘a lot to say’ on a potential move in the winter market.

The La Liga side wanted the forward on a loan deal until the end of the season and were hoping to take him ‘without paying a euro’ to the Red Devils.

ABC Sevilla on Wednesday explain Sevilla knew from the beginning an approach for the 26-year-old was ‘ambitious’, and ‘very difficult’.

The Spanish club ‘launched the first attempt’ to sign the France international on loan, with them promising to pay half of his salary. The deal didn’t include any obligation or option to buy. The Old Trafford side’s ‘answer, emphatically, has been no’.

Manchester United want Julen Lopetegui’s side to not only take care of Martial’s full salary [earns €8m net per year], but also pay a loan fee. This would see the overall deal cost around €10m. 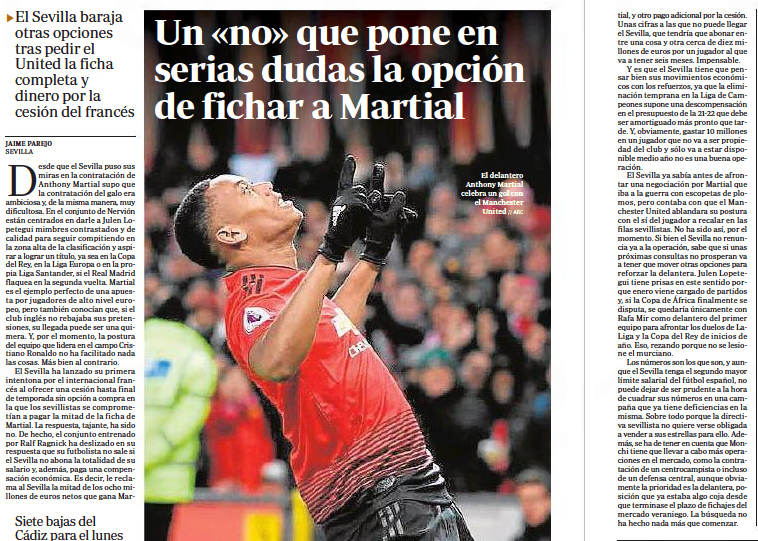 This is ‘unthinkable’ for Sevilla, especially to have the player only for six months. They view this is ‘not a good operation’.

The Andalusian club knew that an attempt to sign Martial was like ‘going to war with lead shotguns’. Sevilla were counting on United to ‘soften their position’ after Martial said ‘yes’ to the move. That has not happened so far.

Despite the disappointment, Lopetegui’s side will not give up on the operation. However, they will move for other targets if there is progress made in their upcoming efforts to sign Martial.

Midfielder now ‘closer’ to Wolverhampton Wanderers – Signing was approved by...