Over the last few days, reports coming out of the media across Europe pushed forward Sevilla as Anthony Martial’s next possible destination.

The La Liga side were brought it into the picture just a week after the forward’s agent said his client wants to leave Manchester United in the winter market.

With Erik Lamela and Suso sidelined with injuries and the Spanish club’s attacking options will be further reduced next month, with Youssef En-Nesyri and Munir El Haddadi’s involvement with Morocco in the African Cup of Nations. Therefore, Julen Lopetegui wants his side to bring in a new attacker in the upcoming transfer window.

According to Marca, Sevilla sporting director, Monchi, ‘wants’ the France international. A deal is nowhere close to being completed because they have ‘not yet started negotiations’ with the Red Devils. United are demanding Sevilla pay half [€7-8m] of the former AS Monaco man’s salary.

Martial’s arrival in January will help Lopetegui and his side reinforce two positions, due to his ability to play on the left side of the attack and up front. 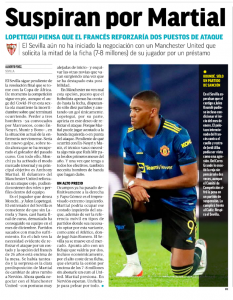 Marca explain Sevilla are already moving in the market. They ‘aim high’ as a move for the United player would be ‘worth two, even economically’, due to his high salary.

A loan deal would cost around €7-8m, ‘without paying a euro’ to the English club.

The Frenchman has favoured a move to Sevilla ahead of other options and Marca end the report by stating: ‘Martial presses. In Nervión, they wait. A signing to fight for everything’.