Jesús Vallejo has been restricted to 162 minutes of action in the Premier League for Wolverhampton Wanderers this season.

He joined Wolves on a season-long loan deal from Real Madrid, but the Wanderers’ decision to sign him on a temporary deal hasn’t worked out.

There have been several claims in Spain the centre-back’s loan deal at Molineux will be cut short this month so that he can then move to another club in the winter market.

On December 31st, Marca reported the player is attracting interest from Spain and Germany. A week later, we covered claims from Mundo Deportivo explaining Leganés’ interest in the 23-year-old. 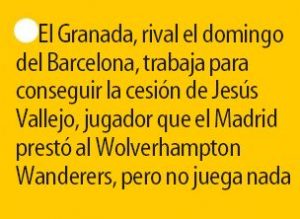 Journalist Miguel Rico, writing for the back page of today’s edition of Mundo Deportivo, mentions Granada’s interest in the defender.

He claims the La Liga side ‘works to get the loan [deal] of Jesús Vallejo’ in January.

Another Spanish newspaper, AS, also claims Granada are ‘best placed’ to sign the player.

Vallejo will be looking for a club that will assure him regular minutes in the second half of the season after a poor first half with Nuno Espírito Santo’s side.