Home Europe Wolves man could ‘change his ways’ in January – Has offers from...
SHARE

Jesús Vallejo could leave Wolverhampton Wanderers in January having found game time hard to come by at Molineux.

Vallejo joined Wolves on loan from Real Madrid in the summer transfer window, with Nuno Espirito Santo looking to add defensive cover to his squad given their Europa League commitments this season.

However, the 22-year-old has found himself on the fringes so far this season, making just seven appearances in all competitions and one start in the Premier League.

It has been suggested that he may leave Wolves and return to Madrid in January and Marca report that is definitely on the cards.

According to the newspaper, Vallejo could ‘change his ways’ in the winter transfer market and is not short of offers should that happen.

Eintracht Frankfurt are keen on him after his spell with the club in 2016-17 while Wolfsburg would also be interested in taking him back to the Bundesliga. 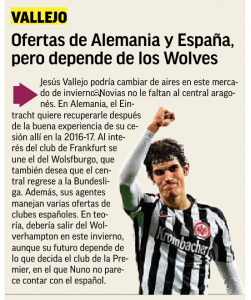 There are also agents handling ‘various offers’ from Spanish clubs as well, although they are not named explicitly at this point.

Marca say Vallejo should leave Wolves ‘in theory’, although it will be the Premier League club who decides his future.

‘There is Liverpool’ – Reds still in picture for signing, Klopp can form ‘phenomenal’ partnership

‘There is Liverpool’ – Reds still in picture for signing, Klopp...

“I don’t know if that is realistic” – Player unsure about...