Gedson Fernandes’ transfer to Tottenham Hotspur is expected to be announced at any time today, so the Portuguese press has only been talking about the details of the transfer.

Newspapers A Bola, Record and O Jogo bring some similar information, saying the midfielder is joining the club on a loan deal which will run until June 2021, and then Spurs will have the chance to sign him permanently.

Tottenham will pay €4.5m to have Fernandes on loan now, and despite having an option to buy him for €50m, that first amount will be discounted in case the clause is triggered.

Record says there was competition from West Ham and Wolverhampton, while O Jogo says Chelsea, Everton and Hammers were the interested clubs. 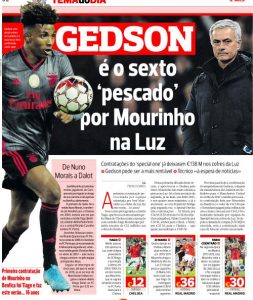 A Bola also brings a special story about all the players from Benfica who José Mourinho signed for his clubs over the years.

He first signed Tiago, another Jorge Mendes client, for Chelsea, in a transfer which cost €12m. No Benfica players were bought in Mourinho’s time at Inter, but he was back at it at Real Madrid.

Angel Di Maria was signed for €36m, and Fabio Coentrão joined the Galacticos for €30m. Then after returning to Chelsea, Mourinho brought Nemanja Matic for €25m. There’s also the transfer of Victor Lindelof to Manchester United back in 2017 for €35m.

Now if all fees are summed up, José Mourinho has already spent €138m shopping at Estádio da Luz.