Southampton are one of the latest clubs to be dragged into the Sandro Ramirez transfer chase. Spanish newspaper Marca reiterate the club’s interest in their Thursday edition, and say they’ll be battling others if they make a firm move during the summer.

Sandro has five goals in his last five games for Malaga, and the 21 year old was Man of the Match in his last two outings. He’s now on 12 goals and 1 assist for the season and without him Malaga may well be doomed, but his double against Granada secured their La Liga status.

One of the most interesting aspects of a potential deal for Southampton is Sandro’s clause, which is around €6m, and has been confirmed by the player himself this week. When Sandro left Barcelona on a free he was in a good position to demand such a low clause from Malaga, and it’s likely to see him move this summer. 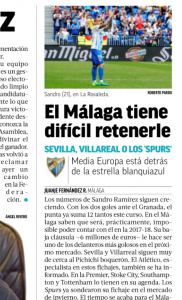 Southampton are continually on the lookout for value transfers, and if it’s correct that Sandro is Claude Puel’s latest idea, then Ralph Krueger will be pleased. The Southampton chairman said earlier this year that transfer fees had reached ‘madness’.

Marca say time is running out for Malaga, given the interest from Southampton and others, and it’ll take some effort to keep Sandro at the club.