Unless you aren’t on social media, you’ve probably seen Patrik Schick’s goal from the weekend to put Sampdoria 1-0 up against Crotone.

Pulling off a Bergkampesque flick to get past the last man, the Czech Republic international then ran through on goal and coolly slotted the ball into the bottom left hand corner with his left foot.

Scoring 12 goals in 30 appearances this season, the 21-year-old has impressed greatly in his first season in Italy, to the extent where the young forward has been linked with a move to the Premier League, with Tottenham said to be interested.

Vincent Janssen’s first season in the Premier League hasn’t exactly been the best, and Spurs could be after a new backup striker for Harry Kane, which is where Schick comes in. 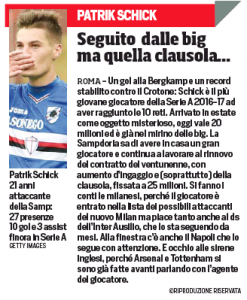 Tuttosport claimed earlier this month the player had a release clause for foreign clubs worth €25m, and now Corriere dello Sport in Italy report that Tottenham have made their first move to sign the player by contacting the player’s agent.

What came from these discussions has not been revealed, but Arsenal are also said to be after the young forward, also holding talks with Schick’s agent.

Valued at €20m, we wouldn’t be surprised if news of Sampdoria trying to renew their deal with the young forward emerge sooner rather than later.

You know, to increase that €25m release clause to something a little bit more appealing.